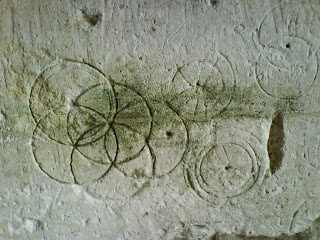 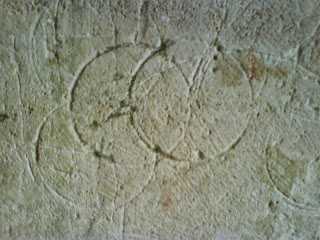 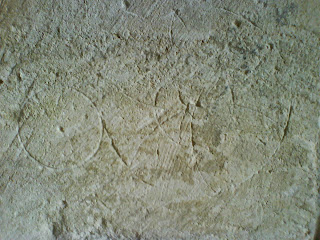 Hi Yvonne,
As an archaeologist I have come across the daisy wheel symbol in several buildings from wales to Kent, including some carved into an old barn in somerset which even the farmer hadn't noticed before (they are surrounded by later tally marks so he never paid them much heed). I have always understood them to be, as you point out in your blog, protective symbols, carved to keep home or harvest safe from spirits or evil influences. I wonder if anyone has ever done any comprehensive research into how many structures still survive with these markings on them and how widespread it was? It certainly seems to have covered at least the south-west to south-east of Britain. I have also seen them carved onto 'practise' stone blocks from a dismantled abbey, also in Kent.

i look at Daisy Wheels quite a lot here:

do get in touch!

I've worked at a few heritage sites with daisy wheels. I understand that you find them near windows, doors and chimneys - places where witches and evil spirits can enter a building...witch sees it and backs off pdq.

Yes I have a photo of the one at Lacock somewhere, must dig it out!

I was speaking with someone called Laurie Smith recently, who is an expert in the use of geometry in the planning of old buildings and is a member of the Carpenters' Fellowship of timber framers (as am I).

Before timbers or stones came cut into standardised sizes they, of course, had to be cut and hewn by hand. Carpenters, masons and builders would use geometrical planning to get the building to fit together. Laurie was convinced that a lot of these daisy wheels (if not all) were the workings out giving the orientation and relative sizes of the parts of the structure for all the builders to read.

Of course, the geometrical symbols may also have been ascribed mystical powers and so the residents may have deliberately left them showing when work was finished. The ones in the tithe barn certainly look very much like practical 'working out' drawings to me . Laurie also said that, by using knowledge of geometry as these builders used it, he can reconstruct buildings to say where parts of them have been removed or altered over time. Interesting Stuff!

If you are interested in tithe barns, there are some images that I took of the beautiful one at Woodspring in North Somerset on my blog here:
http://carvingswithstories.blogspot.co.uk/2013/04/woodspring-priory-and-tithe-barn.html

There are some very useful links to get further information on daisy wheels in construction at this address as well:
http://www.bodgers.org.uk/bb/phpBB2/viewtopic.php?f=2&t=732

They seem to have been a mediaeval practice which suggests that your building is mediaeval. However I am not an archaeologist, so I suggest contacting some of the people who have already commented on this post.

I recently learned about apotropaic marks when researching the history of a our house, which - like a lot of vernacular houses - is older than records go. What is known is that, at one point, it was split into two and one half renamed 'Cartwheel', which set me wondering if there might be a daisy wheel or some such symbol which may have prompted the renaming.

Eventually I noticed a small square recess in the plaster of a wall in a cupboard bordering one side of the central inglenook fireplace. The builders had decided not to re-plaster over it fully, and on the original plaster of the cover was a cartwheel! There are also a cluster of definite marks over the lowest central portion of the remaining original stonework at the 'front', which I can't quite see the full form of other than a couple of the expected 'W's.

It's fascinating stuff, and I'll be trying to get some photographs this week. It's also made me think about designing a little modern-day apotropaic mark over the doorway of the goatshed..

Wonderful, thanks for posting! I would love to see the photos

Daisy wheels are fairly common in churches too. Several counties are currently undertaking the systematic recording of ancient graffiti in churches and compass-drawn symbols, including daisy wheels, are widespread.

Found this one in a12th century church in France:
I have never seen another like it yet
http://i60.tinypic.com/59vkg2.jpg

There are 2 rings like this either side of my windows in a stone cottage in Gloucestershire. They seen to have V symbols and star of David sign as well as a circle so unlikely to be for building purposes alone. I am told they are very early graffiti.

There are 2 rings like this either side of my windows in a stone cottage. They seen to have V symbols and star of David sign as well as a circle so unlikely to be for building purposes alone. I am told they are very early graffiti.

Hello,
A very interesting article this is... I find these signs also in The Netherlands and in Belgium where I investigate them at the walls of buildings. At first I also thought of them to be of apotropaic meaning, but I changed my opinion when I discovered these signs on the wall of the (Catholic) church in the small village of Scheulder in South Limburg , The Netherlands.
Another thing is the method these signs have been made: with help of a compass draw which is indeed the sign of freemasonry, which is an underground organization 'in a way' linked to this church by many encyclicals from the Catholic church.
The main symbol of this freemasonry is the compass draw. In fact after this conclusion I am also able to explain many other marks in the walls. and attribute them as the work of freemasonry. Of course, for the situation in GB it could be different, but I remark some analogies.

For my article see the blog "ingriphto"
page: (paste the link, if it does not work)
http://ingriphto.blogspot.nl/p/blog-page_5.html
(it is all in Dutch, but images speak for themselves).

I think the flower mark may have an older origin in the Hagalaz rune, but it is hard to tell with symbols, as they can have multiple meanings.

I was doing a little online research as I visited Woolsthorpe Manor in Lincolnshire today, a National Trust property that was the birthplace of Isaac Newton and they have various markings in the wall plaster, including a daisy wheel that was described to me verbally as being made for protection from witches/evil spirits. I took some photos but I don't know how they have turned out yet.

Other markings include a tally list for livestock, a large detailed representation of a local church believed to have been made by Isaac Newton and another unusual mark that I think included a hand, also believed to be a protection against witches/evil spirits.

They are all protected behind thick transparent plastic covers for protection, which may have hindered my attempts at getting useful photos.

These are design/drafting aides. They appear in many buildings and in many places as they were actively used during the design and building process. They were widely used in churches, barns and homes in across the UK, Europe and early buildings in North America. IT may be other subsequently ascribed other meanings to them, but it seems likely they were for practical purposes for the builders. See several excellent blogs on the subject here:
http://www.jgrarchitect.com/search/label/daisy%20wheel

This is not witches marks it is a very old geometric symbol found all over the ancient world. It represents the closest bond between spheres, among many things. Do more research ;)