Her Reverence the Archdruid Eileen has posted a marvellous exposition of how the Christians "stole" the Pagan festivals - including some less well known ones like the feast of the Norse god of hangovers, Bleindin.

January 1 - "The Feast of the Holy Name" was originally a feast dedicated to the Norse god of headaches, Bleindin. Believers would stay in their houses, with the blinds down and the lights off. A day of fasting and silence - the fast only broken by special ceremonial food such as raw egg yolks with Worcestershire sauce, and fry-ups.

Anyone who still thinks that the Christians stole the Pagan festivals would do well to read the excellent book Stations of the Sun by Ronald Hutton, which carefully examines the evidence for the origins of the modern Pagan festivals. It's a lot more complicated than you think.

It's also worth reading the following articles from the Association of Polytheist Traditions:

There are several problems with this:

An article in the Vancouver Sun points out the shameful neglect and destruction of First Nations' heritage in British Columbia.

In North Cowichan on Vancouver Island, for example, a site on Somenos Creek shows evidence of being occupied since before the pyramids. There are both human remains and remnants of a mysterious structure whose significance still isn't understood but which might be part of some larger complex.

Yet, despite 17 years of requests from local first nations that it be protected and that the owner of the land compensated by the province, Somenos Creek still languishes in land use limbo without formal protection. Renewed requests by Cowichan first nations to discuss the matter have been repeatedly been put off by the province.

Canadians: please write to your MP and ask them to support the private member's bill to protect First Nations heritage.
posted by Yewtree at 05:05 No comments:

Archaeologists excavating the former Radcliffe Infirmary site in Oxford have uncovered evidence of a prehistoric monumental landscape stretching across the gravel terrace between the Thames and Cherwell rivers.

A team from Museum of London Archaeology (MOLA) has been excavating parts of the 3.7 hectare site. The excavation has revealed evidence of three large prehistoric ‘ring ditches’ along with some evidence of possible associated cremation burials and an enigmatic rectangular enclosure, finds from which are currently being subjected to radio carbon dating.

A collection of essays edited by Dave Evans and Dave Green

Contributions by: Ronald Hutton, Amy Hale, Sabina Magliocco, Dave Green, Henrik Bogdan, Phillip Bernhardt-House, R.A. Priddle, Geoffrey Samuel, Caroline Tully & Dave Evans
Congratulations to all involved in this - it looks great.
Pagans and academics alike should find this anthology useful, as it explores the changes in contemporary Paganism brought about by the publication of Triumph of the Moon - not least among these changes being the abandonment (by the vast majority of Wiccans) of any idea that Wicca is ancient.
posted by Yewtree at 09:05 1 comment:

A new website has been launched to mark the 1600th anniversary of the end of Roman Britain. There will be digs, conferences, lectures, festivals and exhibitions. Proposed digs include Binchester Fort, Caerleon Fortress, Carr Dyke, Colworth Villa, St Albans, and Vindolanda Fort. There's also a lot of lectures and conferences lined up already. There will also be festivals at Caerleon, St Albans, and Hadrian's Wall.

As you can see from this photo I took on Oxford station in 2007, it's still a live issue... 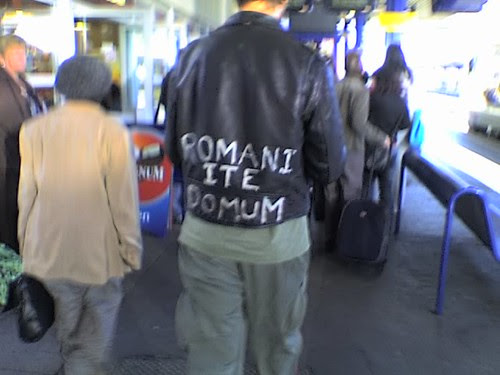 Life of Brian - Romani ite domum
posted by Yewtree at 14:11 No comments: