The Sinnissippi Mounds were made by a mysterious culture or group of cultures known only as "the Mound-Builders", or the Hopewell tradition, or the Adena Culture.
In his new book about the mounds, Fritz Zimmerman argues that the the Hopewell were Sioux (Dakota and Lakota) along with the kindred tribes of Cherokee and Iroquois (Haudenosaunee). The author explores over 700 mound and earthwork sites in 5 states; it took him eleven winters to complete the project. The book includes photographs of 222 sites and gives directions to the sites. 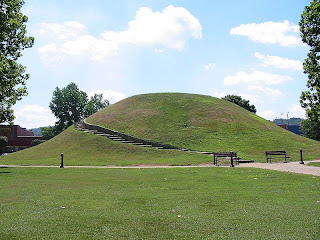 Available from Itasca Books
The book also argues that the mound-builders had complex mathematical knowledge which enabled them to build the mounds, and hypothesises that we can work out the purpose of the mounds by linking them with the mythology of the Sioux, Iroquois and Cherokee Nations. Whether or not that is the case (I'm a little bit sceptical), this book is still a valuable gazetteer of the mounds, and will doubtless fascinate anyone who is interested in Native American culture.
posted by Yewtree at 08:11

What a surprise to see something from my region on PFA!
I wasn't aware that there were preserved mounds in Sterling. I've been to countless mound sites all over the Midwest, but somehow missed this one just an hour away.
The book does look like a necessity, but yeah, a little skepticism might be healthy. I notice the author appears to be an amateur, which is too often a cause for alarm with Indian Mounds.
Nice blog, BTW.

Do not be sceptical of this book. All of the research was done hands on and on the site. Fritz has worked in journalism in years past and delivers a refreshing truth in this great piece of work. Great job and the truth be with all of you.

Thanx muchly! Will look for this. Cool to see stuff on this side of the pond covered!

Skepticism isn't a bad thing - it means you're taking the work seriously enough to hold it to a standard.